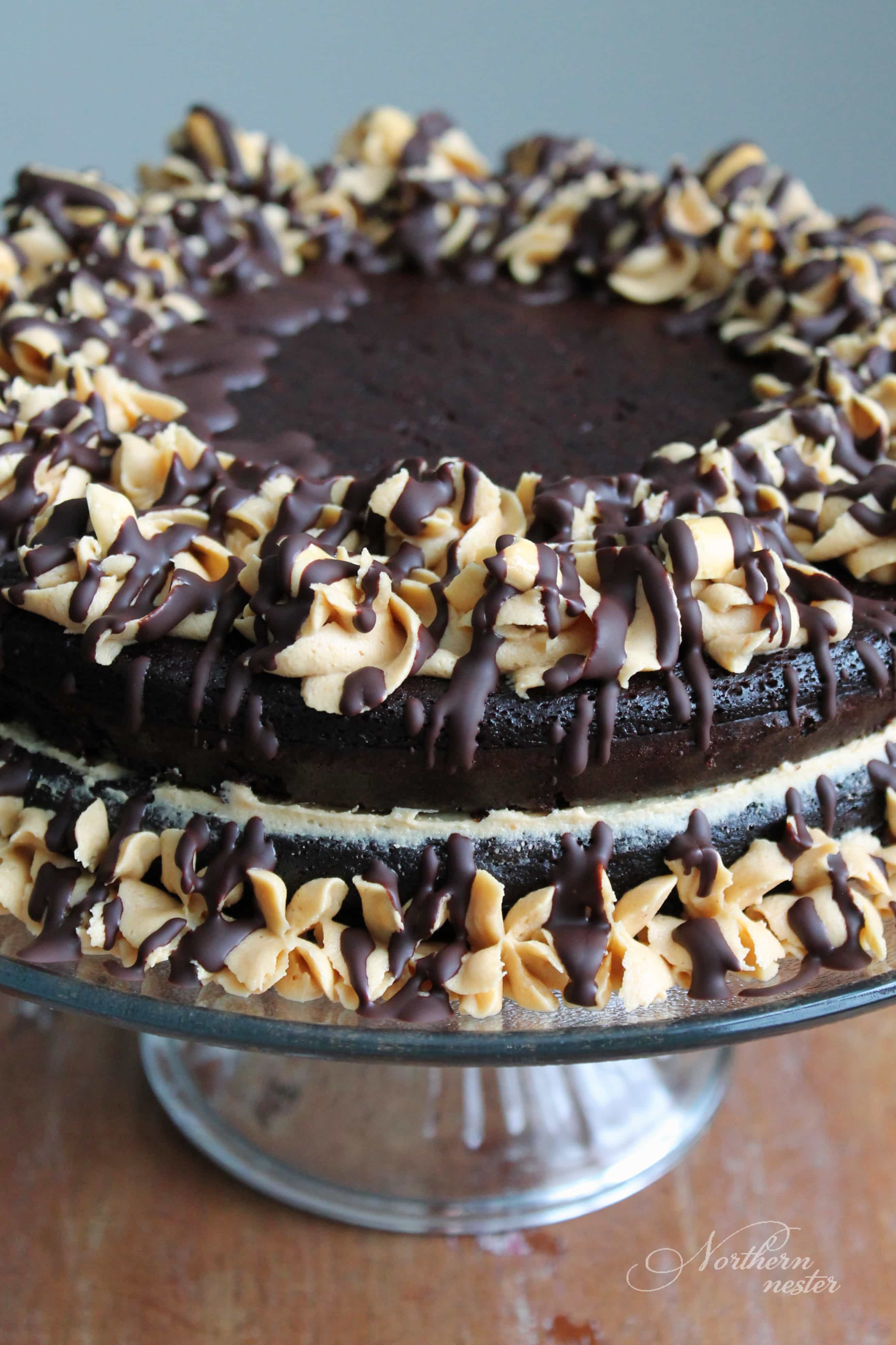 “This cake….this is exactly what you’d expect to taste when you want a chocolate cake.” ~ My husband, after sinking his teeth into this Peanut Flour Chocolate Cake with Peanut Butter Buttercream frosting.

This Peanut Flour Chocolate Cake has the best texture of any low-carb, THM-friendly cake I’ve ever made! It’s incredibly light and moist, and wonderfully chocolaty. If you’ve struggled to enjoy the density of Baking Blend cakes, give this one a go. It will rock your world. 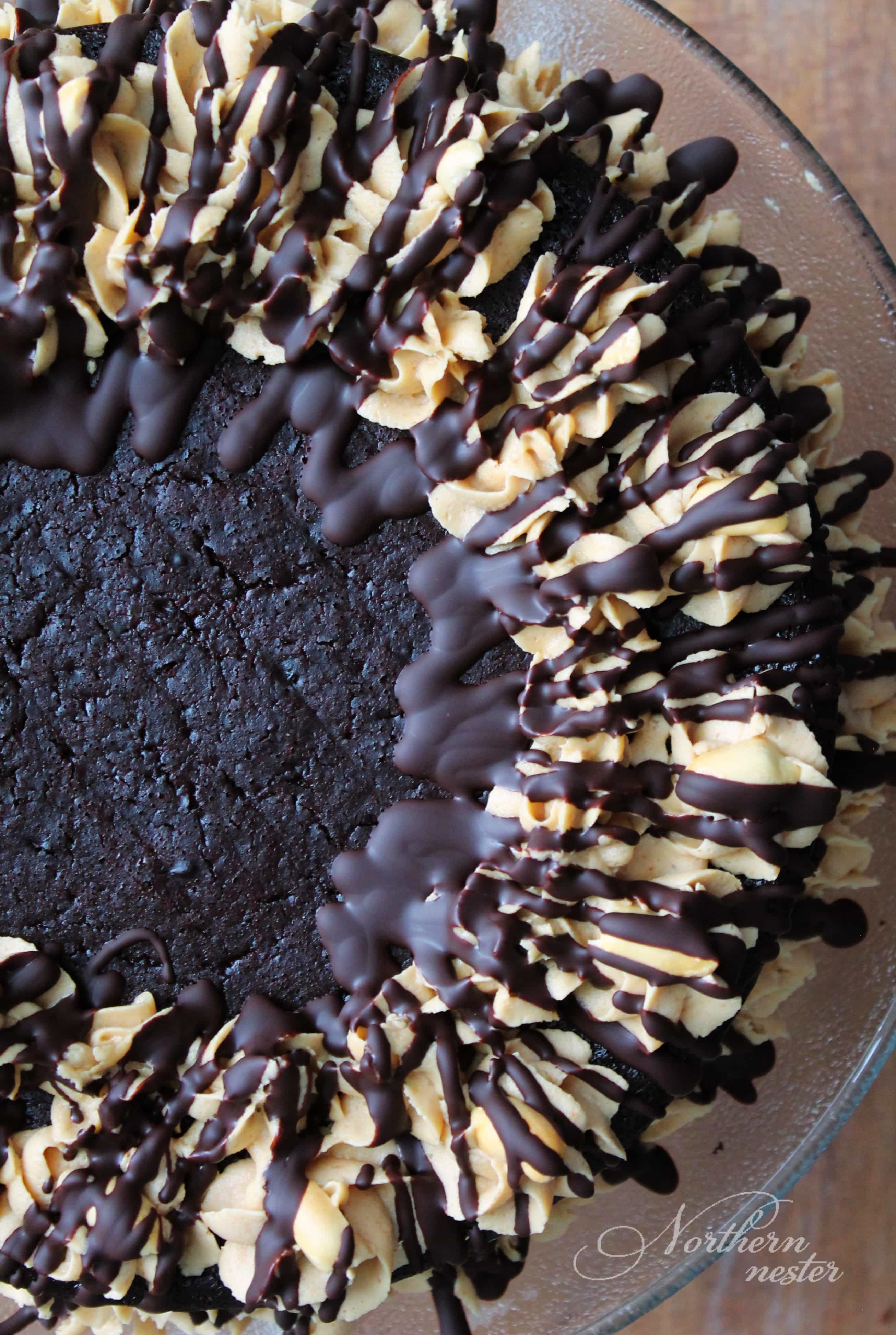 Defatted peanut flour is a very dry flour to work with. It’s very similar in its constitution to coconut flour, but I prefer it’s flavor. It just requires a lot of moisture to balance it out. In this Peanut Flour Chocolate Cake, that moisture comes from 4 eggs, butter, and unsweetened cashew milk. The mixture is quite runny when you pour it into the baking pans, but it bakes up gorgeously!

I chose to make a Peanut Butter Buttercream frosting for this cake because who doesn’t love the peanut butter and chocolate combination?! The buttercream is made by whipping butter and sweetener together until fluffy, then adding in peanut butter, a splash of cream, and vanilla extract. The result is a frosting so delectable, my kids surround me like little birds in hopes I’ll be generous with any leftovers and squirt a rosette from the piping bag onto their tongues.

Aside from the amazing texture and flavor, the next best thing about this Peanut Flour Cake is that it doesn’t require any special ingredients to make! Sugar-free, defatted peanut flour is now a popular ingredients and easily sourced locally.

My favorite brand is Lakanto or Tru-Nut, because of its darker, bolder roast, but Trim Healthy Mama’s Defatted Peanut Flour, and the sugar-free version of PB & Me will also work just as well in this recipe. 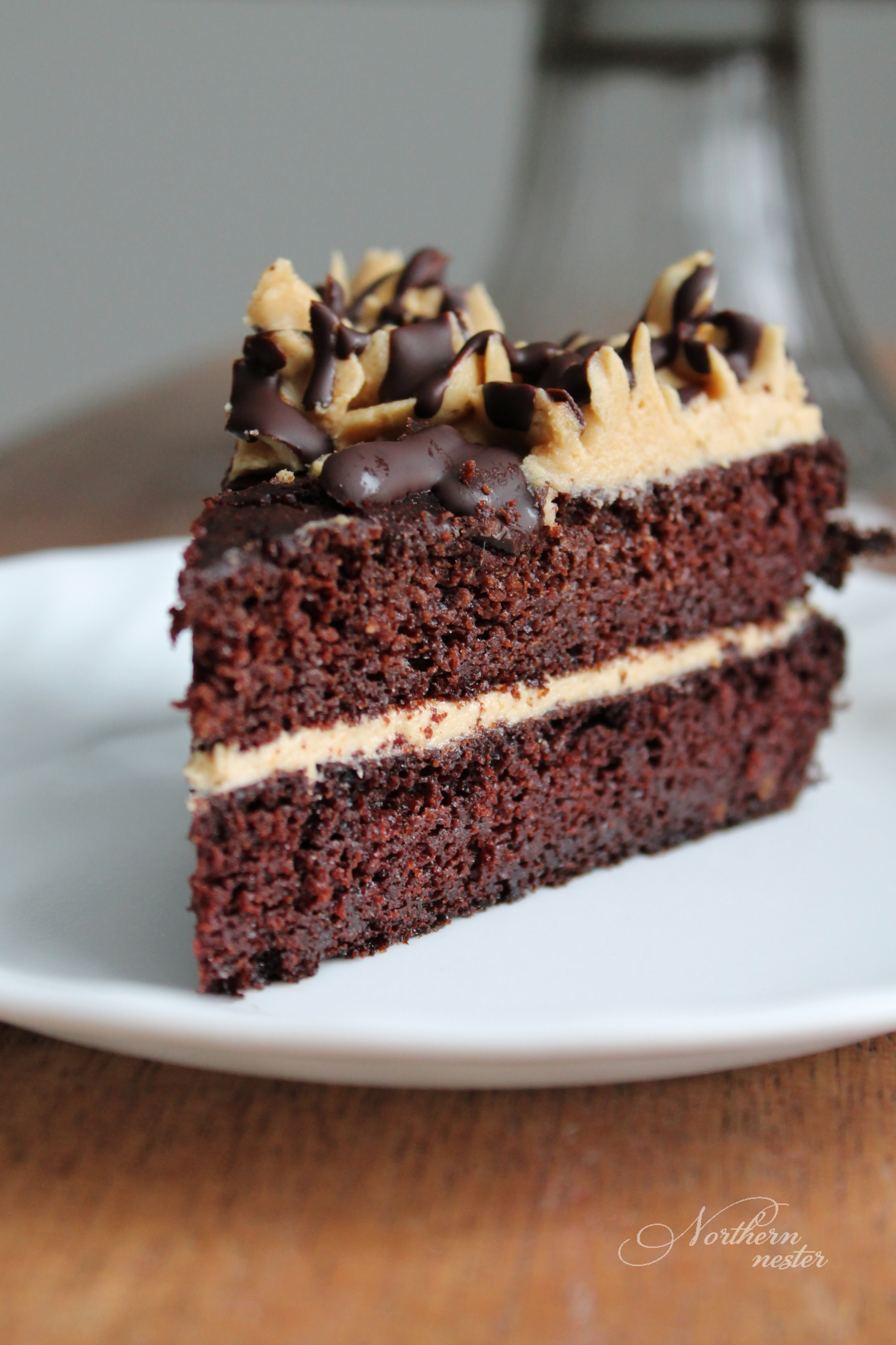 If you’d like, you can make this cake dairy-free by using coconut oil in place of the butter. 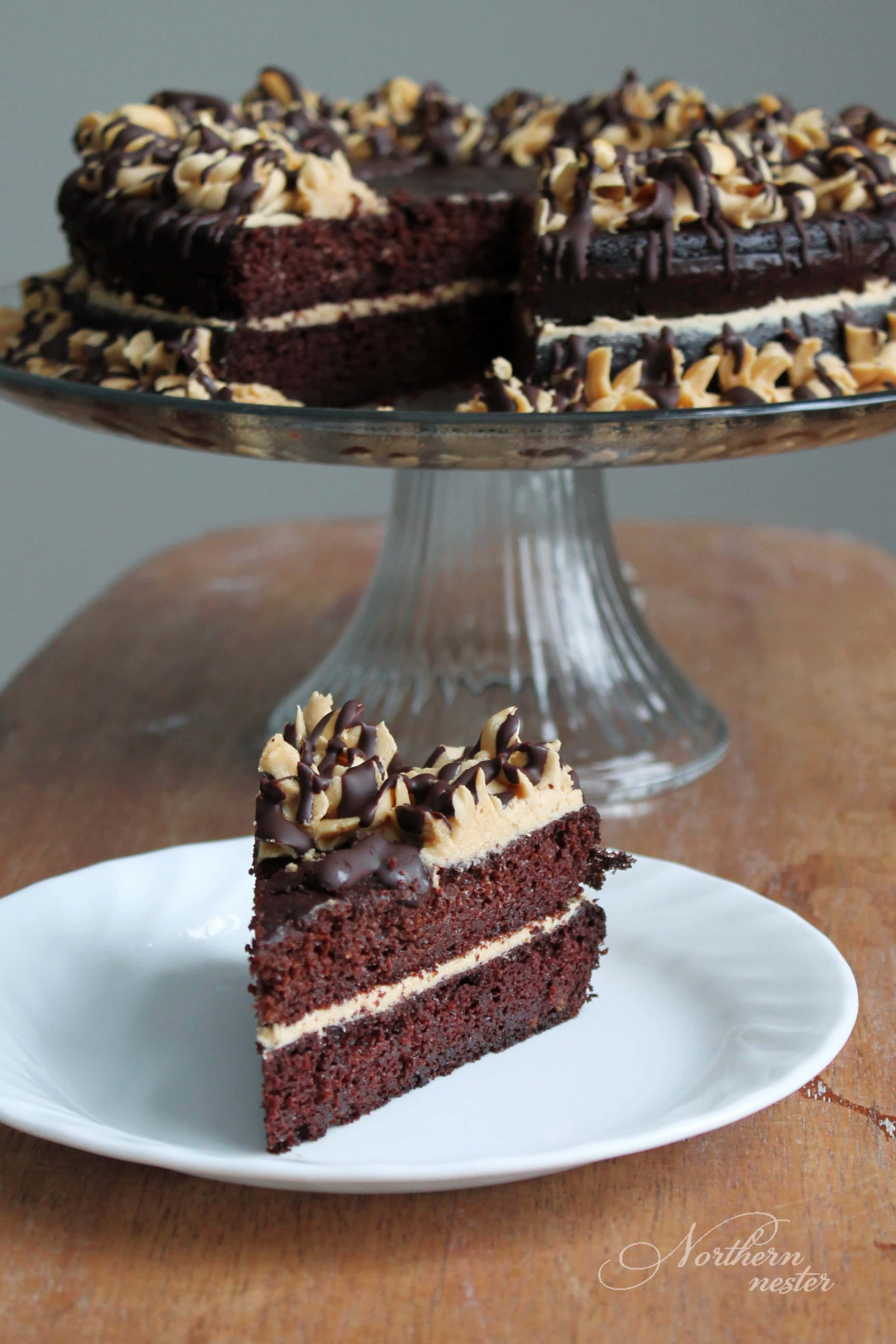 Since publishing this recipe, it has quickly become the most popular one on my site! I’ve discovered my oven temperature is a bit cooler than most, so I’ve lowered the baking time in the recipe by 5 minutes.

Also, this recipe makes AMAZING cupcakes! Simply fill up the liners in a 12-cup muffin tin and bake for 15 minutes instead. 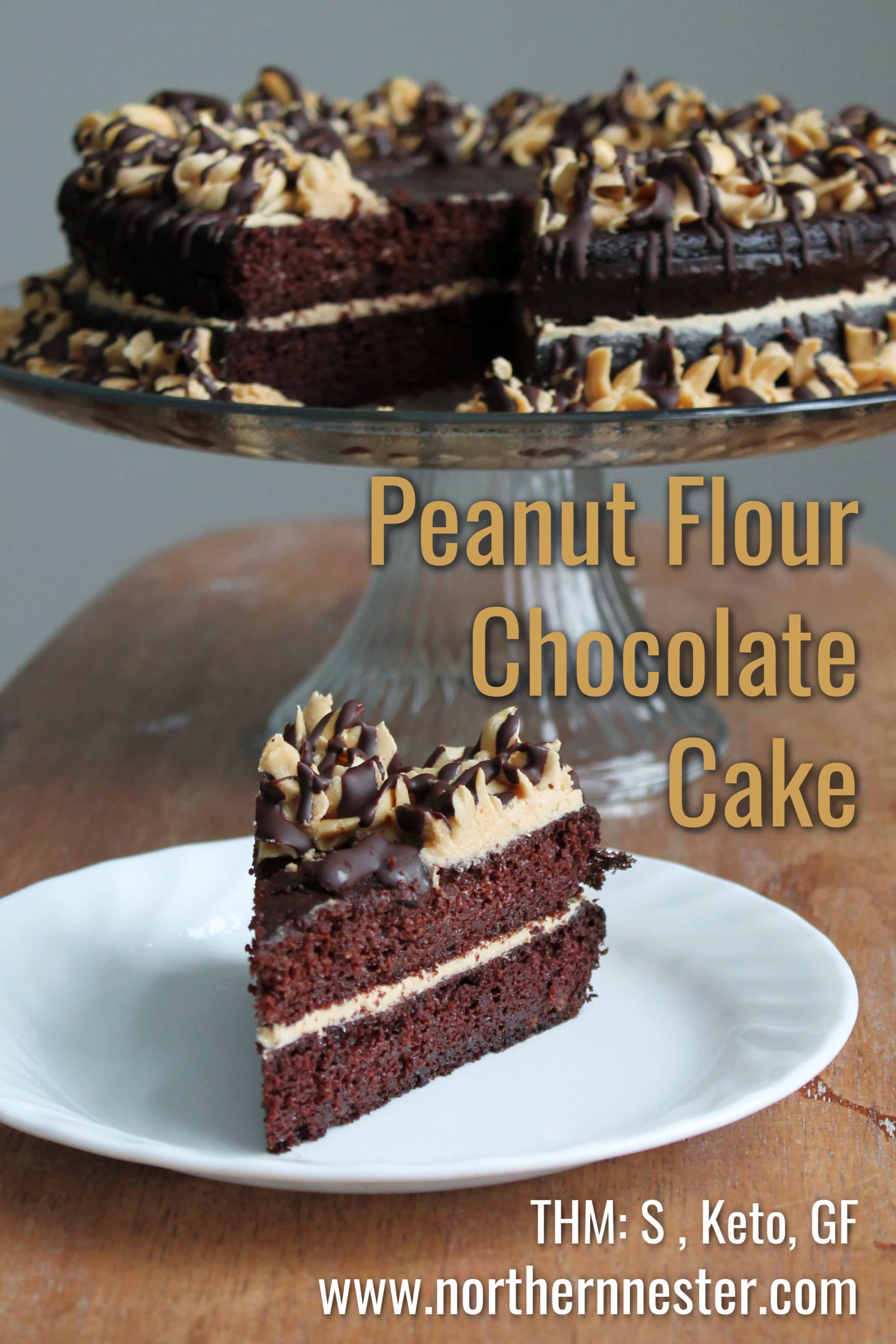