I’ve made this low-carb Strawberry Pretzel Dessert twice in five days. My whole family cannot get enough of it, especially my husband – he even licked the kids’plates clean “so it goes to waist and not to waste!” 😀

(Except, this low-carb Trim Healthy Mama version of the classic dessert is waist-friendly, as it’s free from both sugar and gluten!) 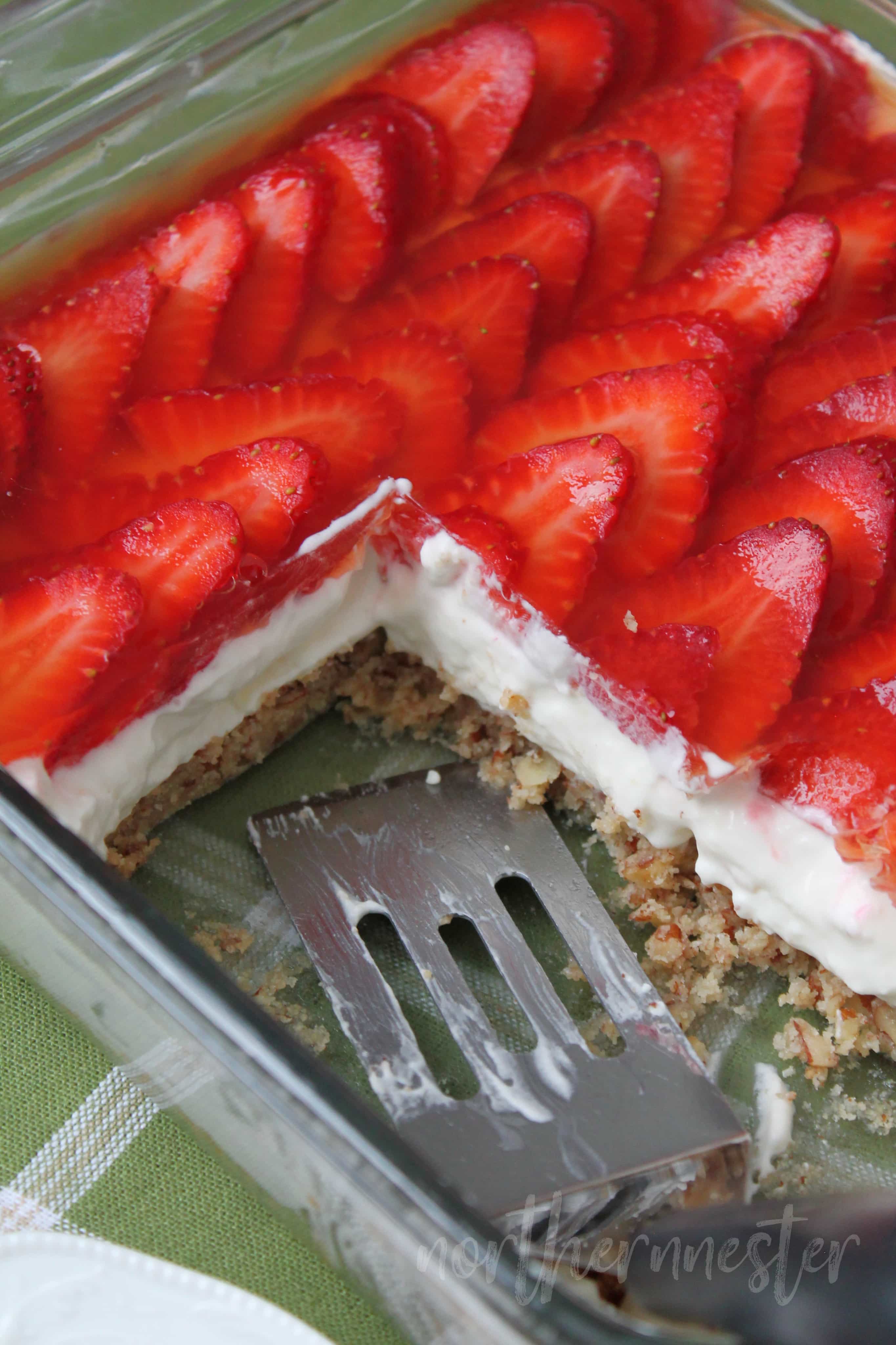 My favorite part of the traditional Strawberry Pretzel dessert is the pretzel crust, so I spent the most time trying to get that part juuuuuuust right. Nothing beats the sweet ‘n salty layer combined with the creamy middle, and sweet, Jello-set strawberry topping!

Using sprouted pretzels might have worked, but they would have made this low-carb Strawberry Pretzel dessert a Crossover, which I wanted to avoid.

Instead, the winning combination ended up being made from melted butter, coarsely chopped pecans, almond flour, sweetener and salt. My kids didn’t even know I hadn’t used pretzels! The crunchy, salty, sweet layer is my favorite part and really makes the whole dessert.

The creamy middle is made by simply beating a package of softened cream cheese and folding it together with sweetened whipped cream.

While the middle layer sets in the fridge, you can start working on the topping, which is my other favorite part! The naturally colored and flavored “Strawberry Jello” is made using Celestial Raspberry Zinger Tea, sweetener, lemon juice, and unflavored gelatin.

I used one packet of Knox unflavored gelatin for the recipe to keep it free from special ingredients, but you can also use 1 tablespoon of Trim Healthy Mama’s Just Gelatin or Great Lakes. 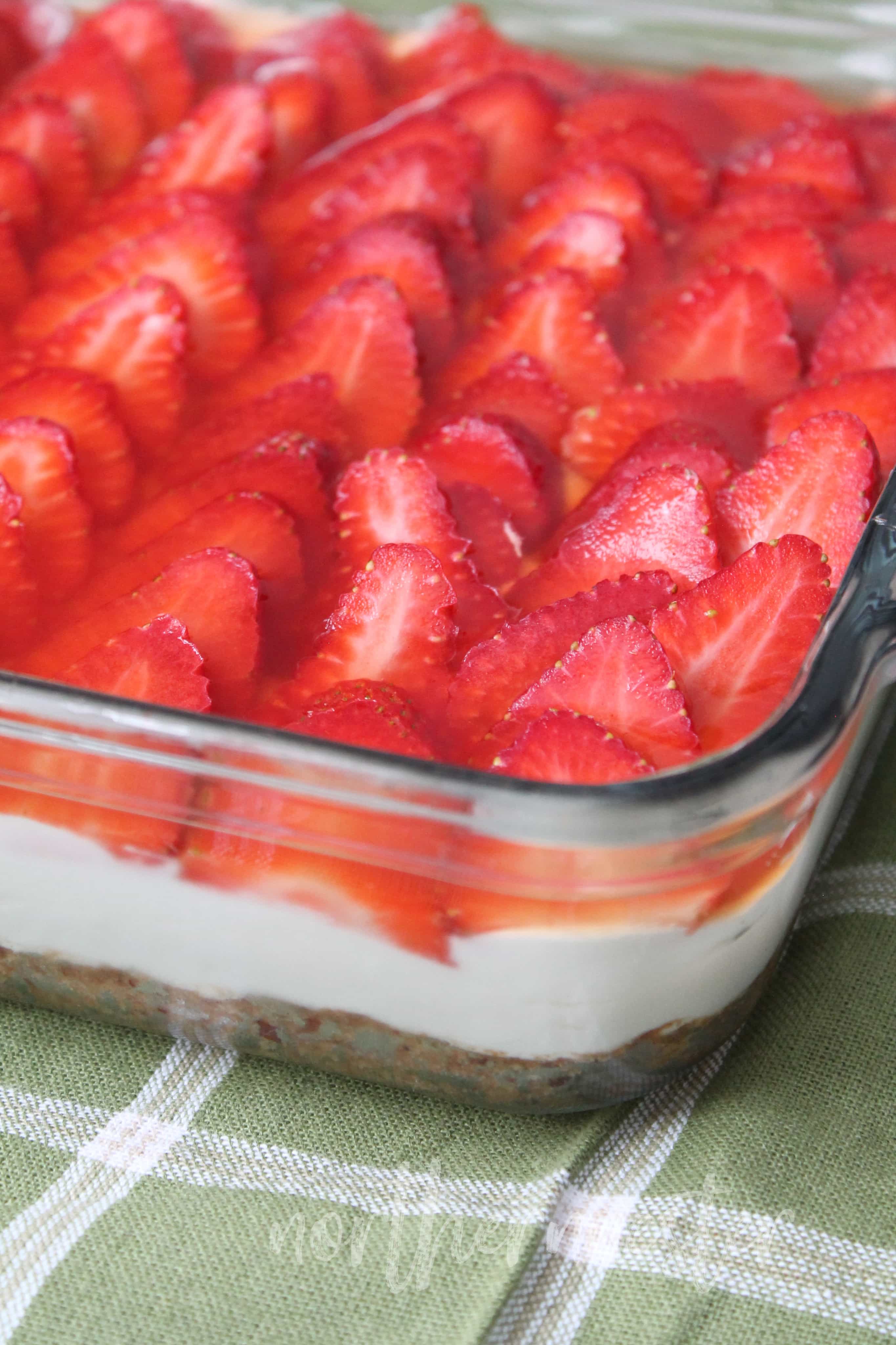 Both times, I served this low-carb Strawberry Pretzel Dessert on the same day I made it, and the baking dish got cleaned out. Like most desserts made with alternative sweeteners, I still think it tastes best the next day, but you can totally get away with serving it right after the “jello” has set. 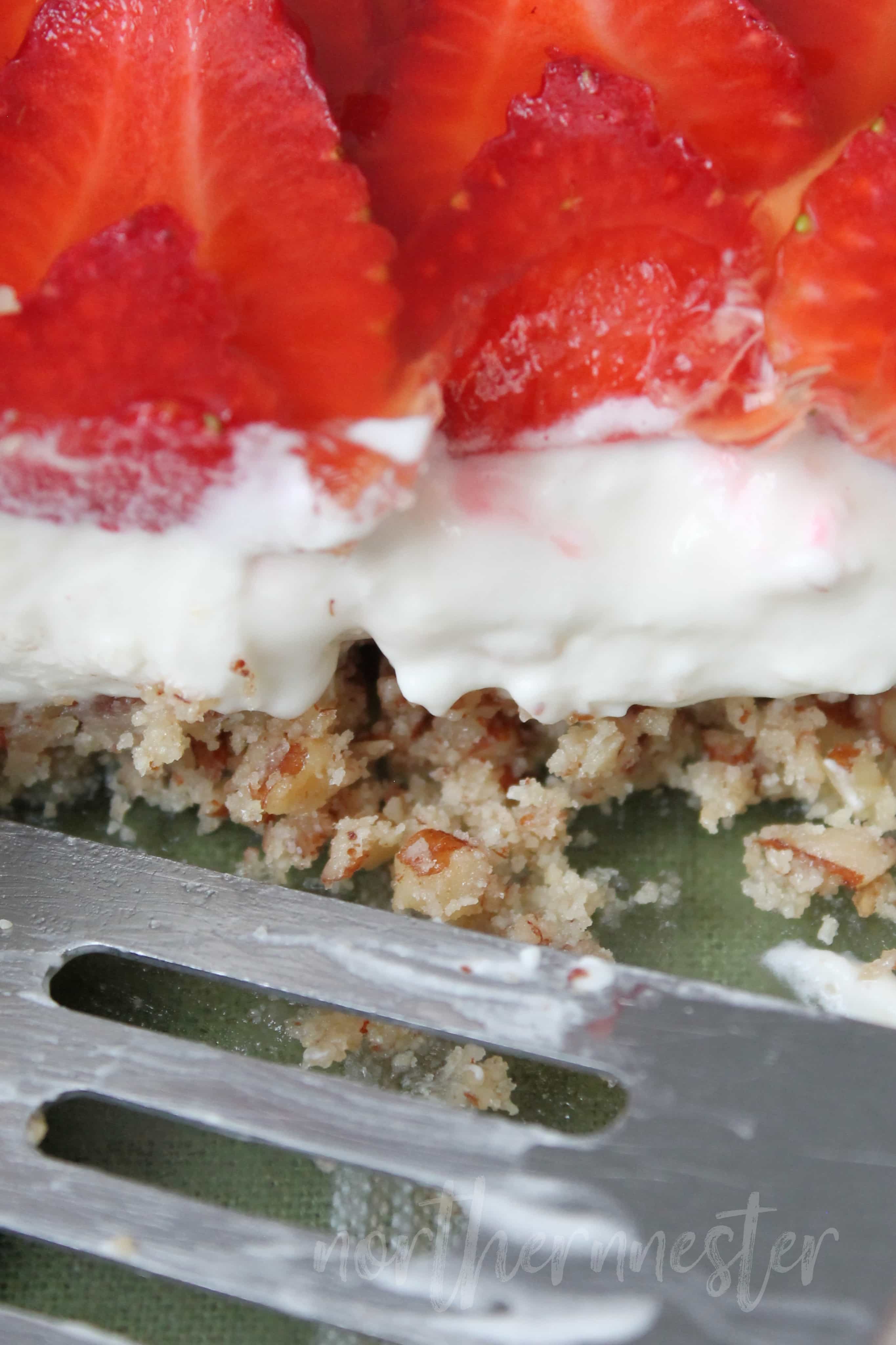 Wouldja look at those sweet, creamy, and crunchy layers?!

Oh, so good together. 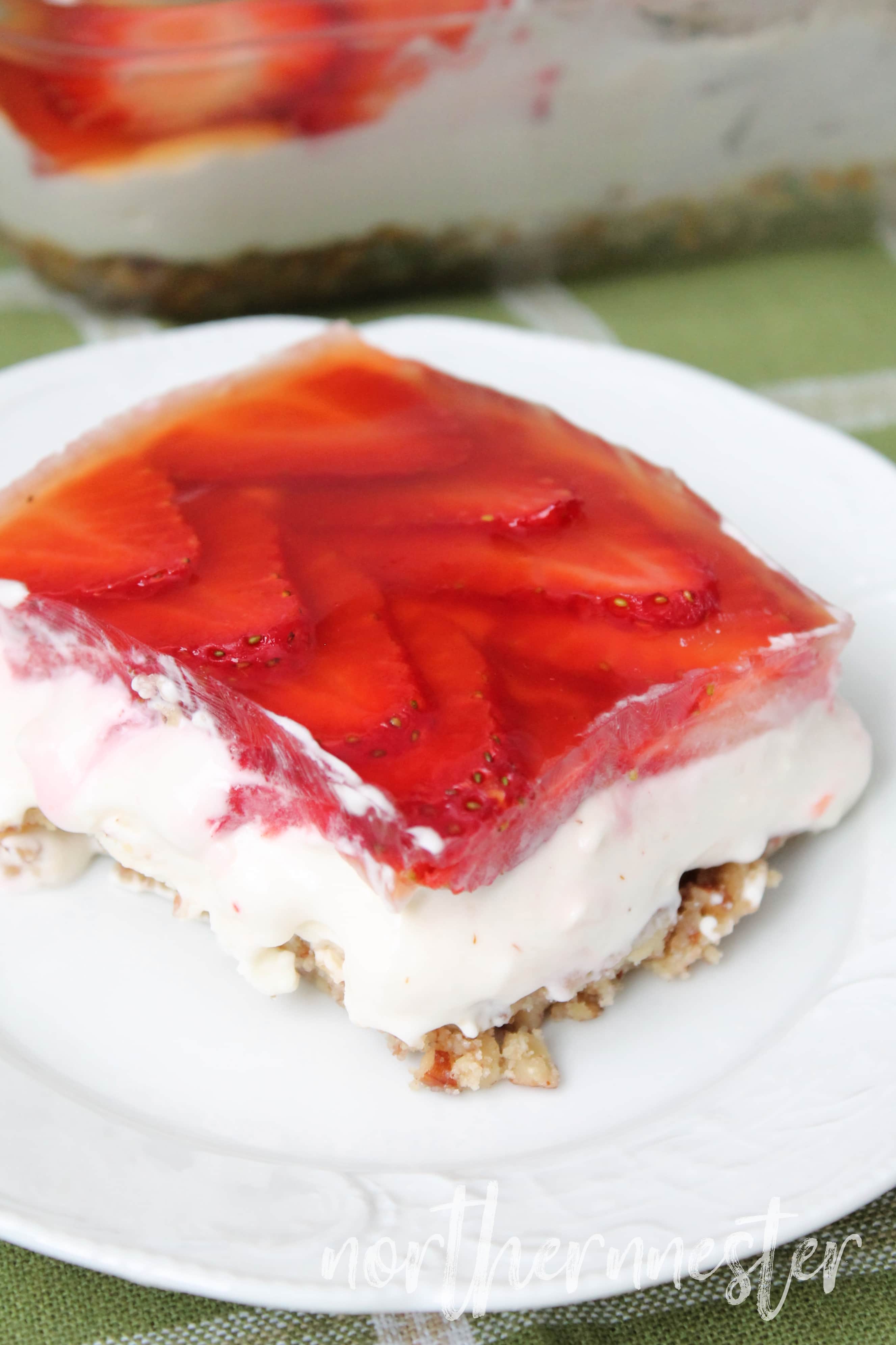 If you prefer, you could also use raspberries instead of strawberries in this dessert.

I hope you enjoy the low-carb version of this classic as much as our family does! 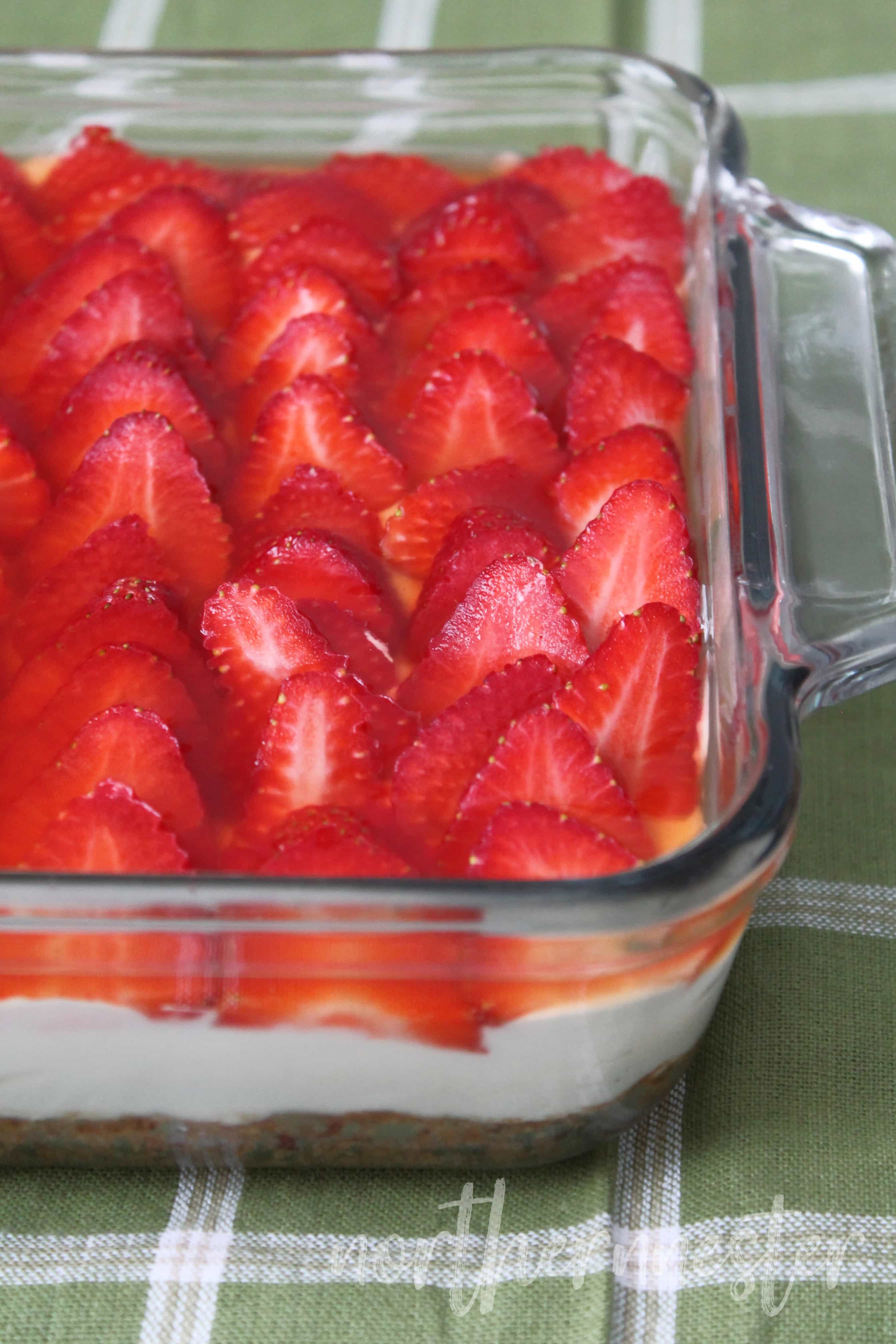 You may substitute raspberries for strawberries.

Gentle Sweet can be used in place of xylitol in half the amount, or Super Sweet in a quarter of the amount.