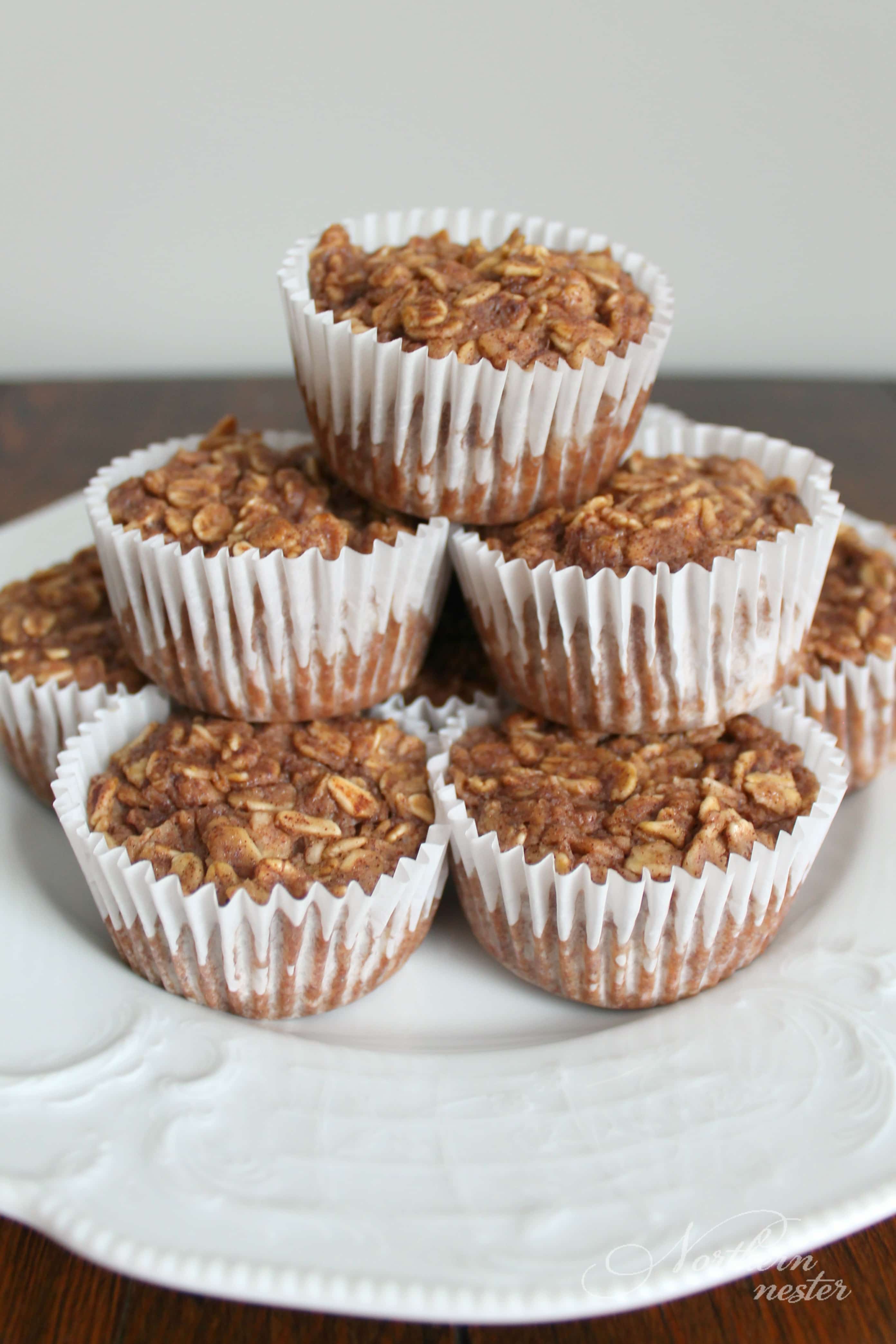 Pre-THM, Quaker Instant Oatmeal packets were my standard wintertime breakfast, and the apple cinnamon variety was one of my favorite flavors. Even though they were warm and comforting, those instant breakfasts provided little nutritional value. The combination of oats, sugar, and chemically processed flavorings were highly refined, and with almost no protein to act as a buffer, my blood sugars took a hit and I didn’t feel full for long after. However, the flavors wrapped up in those convenient brown packets were on point and also the inspiration for these healthier, heartier Apple Cinnamon Baked Oatmeal Cups! 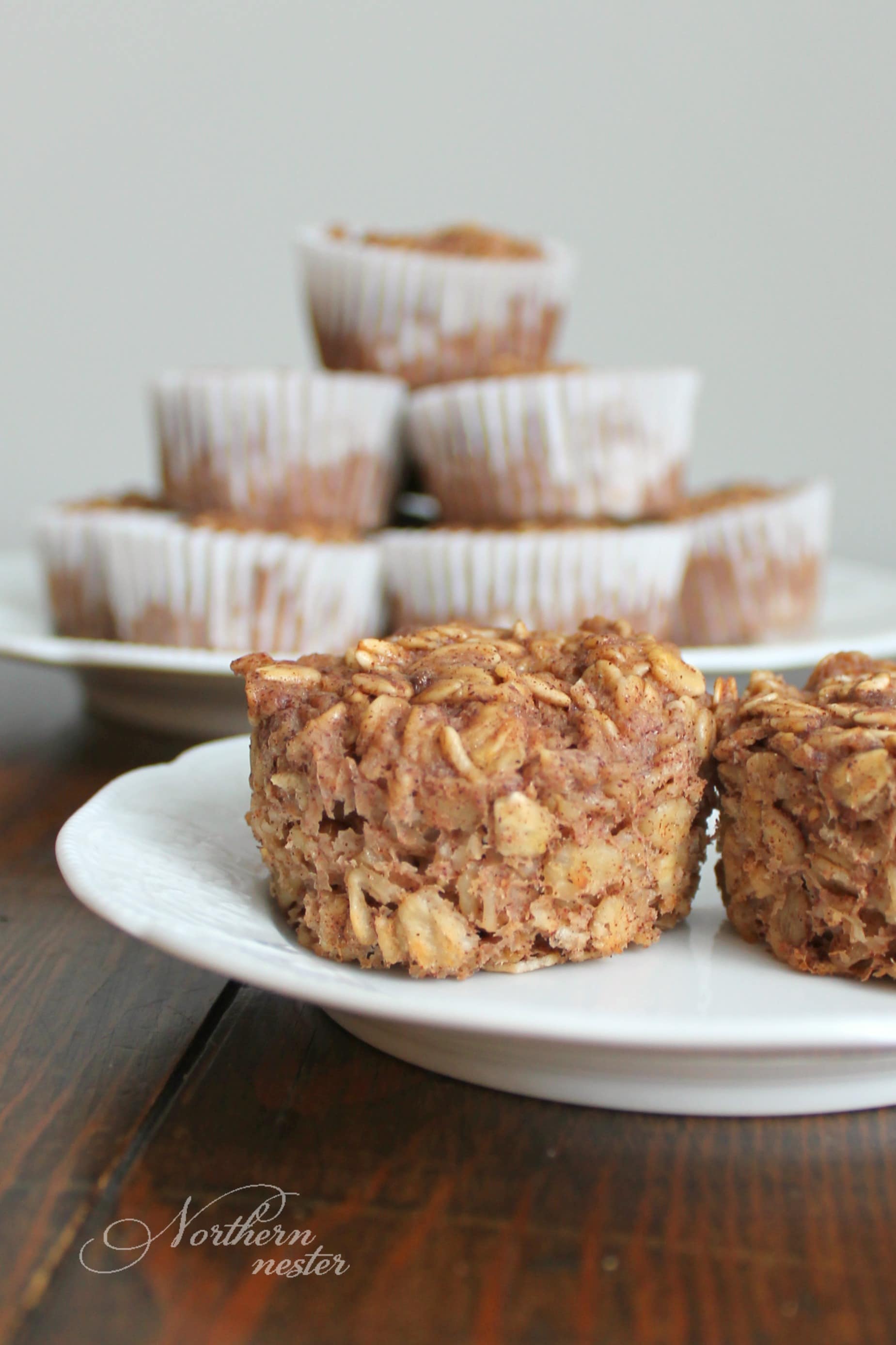 These Apple Cinnamon Baked Oatmeal Cups are a deliciously flavorful Trim Healthy Mama-friendly E breakfast or snack, made with no special ingredients. An infusion of protein comes from: 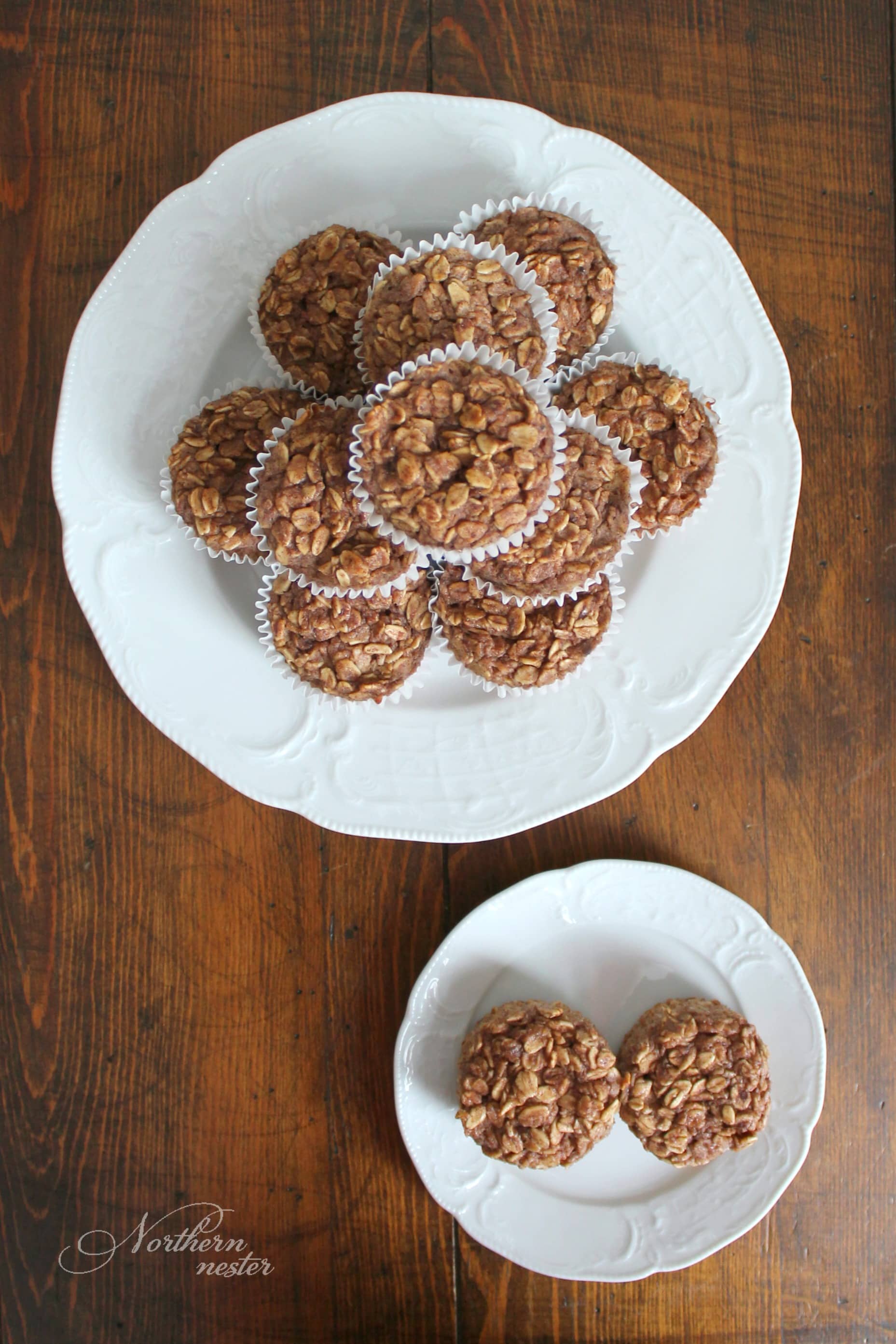 A single banana is the “secret ingredient” in these baked oatmeal cups. You can’t taste it at all, but it provides a very natural sweetness and cuts down on the amount of sweetener needed (I used xylitol, but you can also Gentle Sweet in half the amount), making these oatmeal cups a very frugal meal, too. Unsweetened applesauce and cinnamon are mainly responsible for the flavor here.

This recipe makes 24 apple cinnamon baked oatmeal cups. They can be frozen or stored in an air-tight container in the fridge. I find myself craving carbs around 3:00pm every day, and these are so nice to have on hand for a quick grab-n-go snack with a cup of coffee. My kids love them too, and they make excellent breakfasts on busy morning with a glass of low-fat or double fermented kefir. 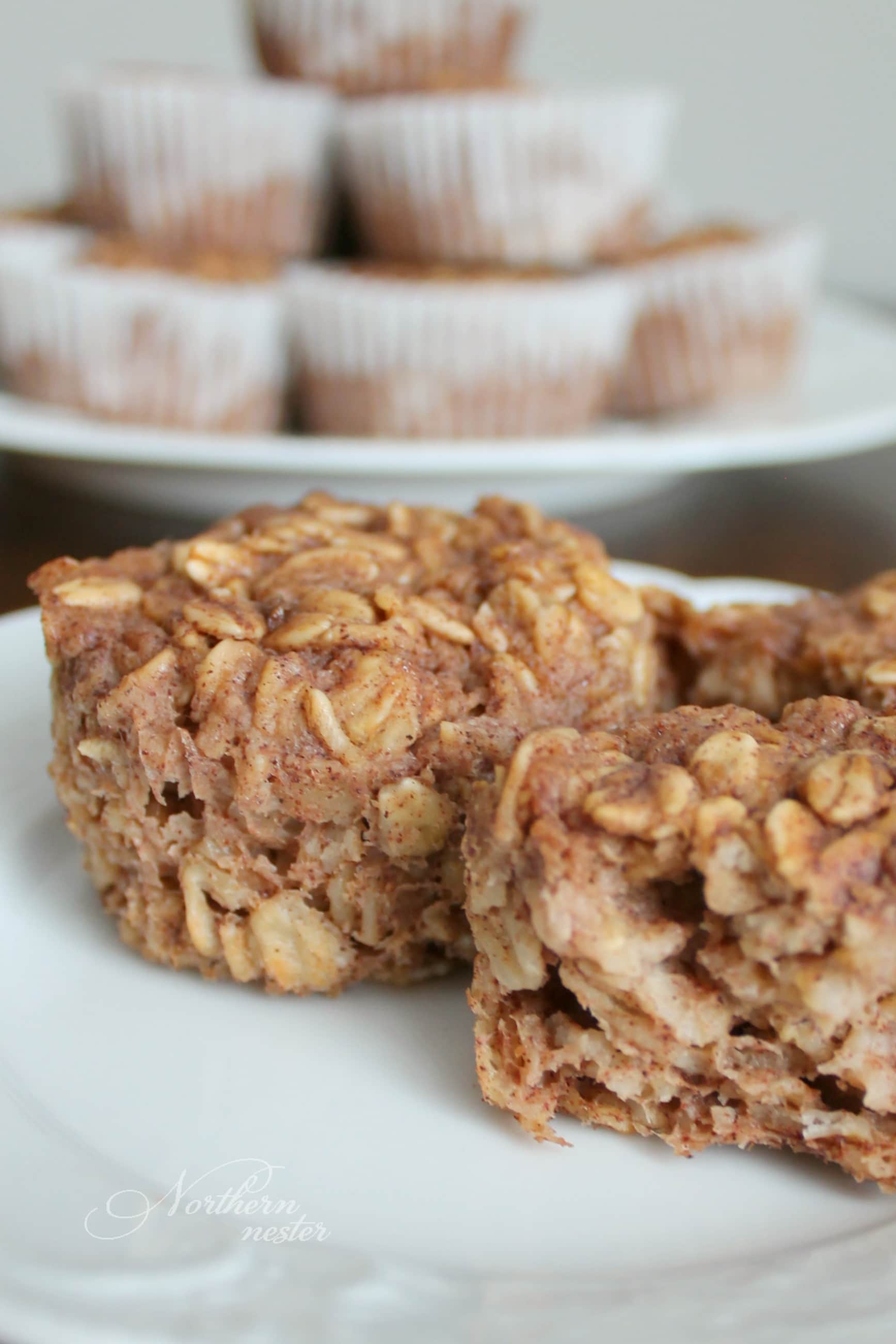 These are best made the day before. They are delicious warm out of the oven, but they will fall apart if you remove the liners before they’ve had a chance to cool completely. You can have 2 per serving and still be within the 45 gram carb limit for E meals.

You can have 2 per serving and still be within the 45 gram carb limit for E meals. 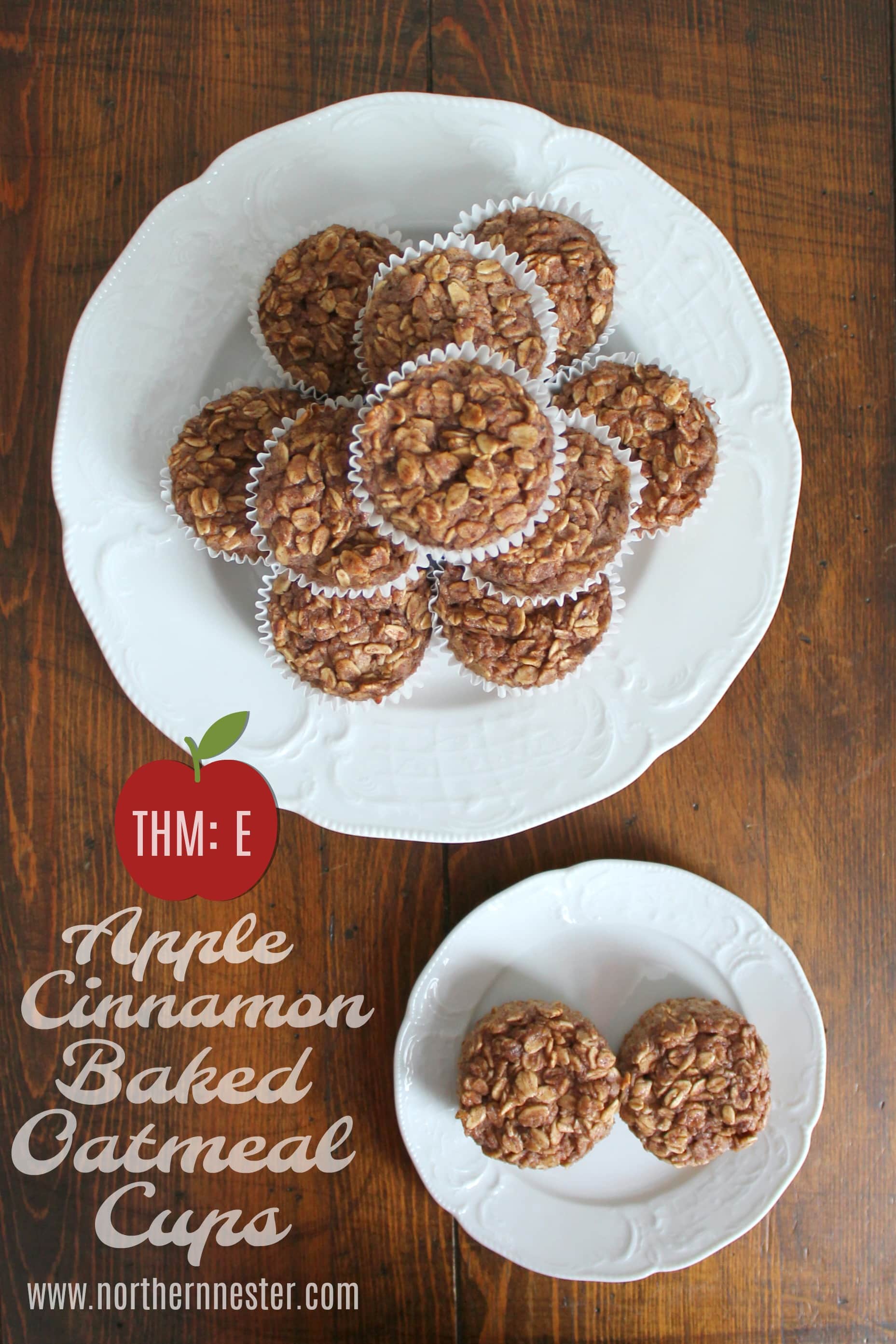