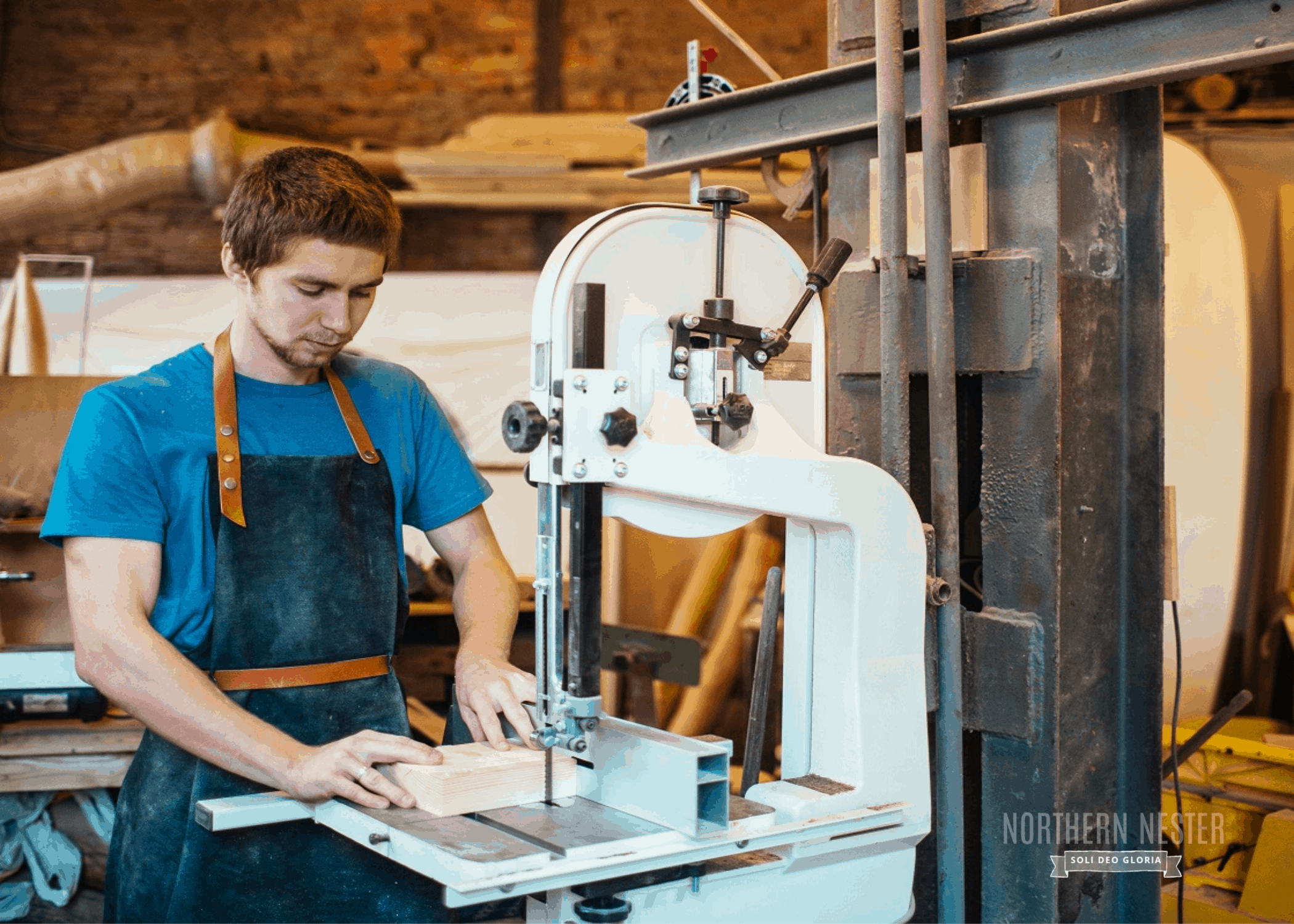 If you are a carpenter, decorator, woodworker, general handyman, or anything in between, you need to have the right tools in your arsenal. This means having a variety of saw types so you can make the right cuts with the right machine. There are band saws, scroll saws, miter saws, compound saws, jigsaws, and more, and they each have their own particular uses.

Today, we are doing a band saw versus scroll saw comparison. At first glance, both of these machines look more or less the same. However, upon closer inspection, you will notice that there are some major differences between the two, especially when it comes to the jobs which they are ideal at performing.

Let’s take a closer look at both the band saw and the scroll saw, and figure out which one you want to use for what jobs.

If you look at a scroll saw, you will see a flat work table, one with a column that comes straight up from the back of it. At the top of this column, there is an arm which is parallel to the table. Out of this horizontal arm, there is a very small blade that runs vertically from the end of the arm, through the table, and down to a mechanism below the table. A scroll saw has a very small vertical blade with teeth on one side. This blade moves up and down very quickly, thus making cuts into the wood and potentially other materials too.

If you have a throat size of 15 inches, it means that you can work with materials as wide as 30 inches because the blade only needs to reach the center of the work piece, and not all the way through. However, keep in mind that you do want to be free to make detailed cuts, so if you have a 15-inch throat size, sticking to materials that are not wider than 26 or 28 inches at the most is what you want to aim for.

In terms of length, scroll saws cannot handle very long work pieces because when you feed a long piece through, it does not take long for that piece to reach the column which holds the horizontal arm.

For reference, here are some of the scroll saw tips you can check:

You also want to think about the blades, as most scroll saws have blades that top out at around 6 inches in length. For the most part, they cannot handle materials that are any thicker than 2 inches. Although, in reality, any thicker than 1 or 1.25 inches is going to give you problems, as you do have to account for the up and down motion of the blade itself. However, a big bonus of the scroll saw is that changing the blades and adjusting the tension is very easily done. There is usually a simple tension adjustment knob for this. It’s beneficial due to easy blade changes, which allows for fast inside plunge cuts with ease. When it comes to inside cuts, it’s actually one of the biggest things which sets it aside from a band saw, which cannot make inside cuts.

When You Want to Use a Scroll Saw

Scroll saws, due to their small blades, are great for working with smaller and thinner materials, such as small pieces of wood. The scroll saw is the ideal choice to go with for small, decorative, and intricate work that requires a lot of detail, blade flexibility, and maneuverability. This short and thin blade is easily able to make very intricate cuts that many other saw types simply cannot deal with.

They allow for very clean and precise cuts, something which a band saw cannot muster. A scroll saw is also able to do inside plunge cuts, something else a band saw cannot do. There are various projects which a scroll saw is ideal for, such as making jigsaw puzzles, making patterns, creating letters and numbers out of wood, and making things like wooden plaques with detailed or curved edges.

When You Don’t Want to Use a Scroll Saw

Scroll saws are not great for everything; they do excel at smaller and more detailed work projects, but they also have their downfalls. If you are working with large and thick material, a scroll saw is not going to be able to perform very well. Their small, thin, and flexible blades are not designed to handle thick materials or large pieces of wood.

There are some scroll saws where you can upgrade the blade for more cutting power and torque; this will only go so far. If the material you are working with is thicker than 1 inch, you will want to consider using a band saw as opposed to a scroll saw. Moreover, scroll saws do not excel at making very straight cuts; getting a very straight cut made with a scroll saw, especially a longer one, is going to be nearly impossible.

The very same features which make the scroll saw great for small, intricate, and detailed work, are the same ones that make it a bad candidate for large and straight cuts, and for working with thicker and larger pieces of wood. 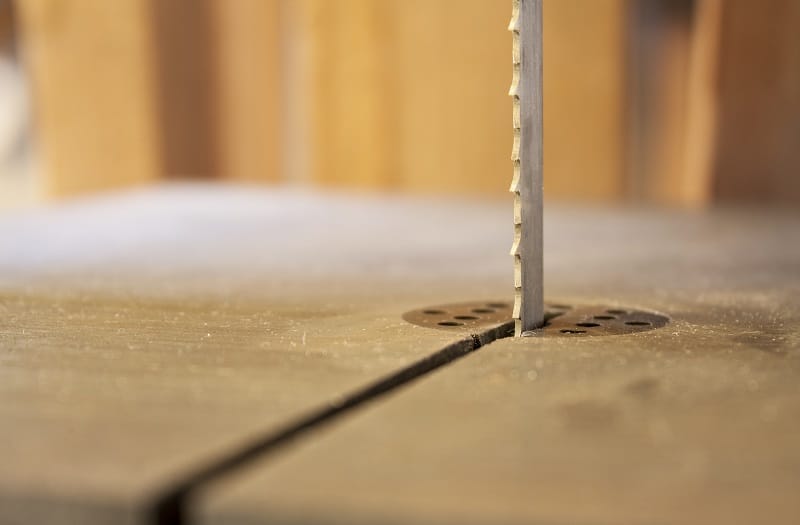 Although the scroll saw looks similar to the band saw, it is quite different. The band saw also features a flat work table, one with a column that extends vertically from its rear. This column has a horizontal arm which runs perpendicular to the work table, an arm which holds the blade, and the blade then runs through the table and attaches to a mechanism below said table. However, when it comes to similarities, the design or look is more or less where the similarities end and the differences start.

One big difference between the band saw and the scroll saw is that the band saw has a lot more power. They tend to have much stronger motors which a higher RPM and overall output. This allows band saws to work with fairly thick and large materials.

If you use the right blade, a band saw can even be used to cut through certain types of metal. As we mentioned before, one of the biggest differences between these two tools is the blade, especially when it comes to the size, thickness, and motion of the blade.

If you were to examine a band saw, you would notice that there is a 2-wheel and sometimes a 4-wheel system in place. These wheels are placed under and over the table, either 1 on top and 1 on bottom, or 2 in each position. The blades used with a band saw have a circular shape and are very flexible. These circular blades stretch over the wheels, and as the wheels move, the blade moves; thus, the blade forms a band, and this is hence where the band saw gets its name. Now, one of the really big differences is that the scroll saw’s blade moves up and down, whereas the band saw’s blade moves in a continuous downward motion.

Band saws also differ in the thickness and size of materials which they can handle. When it comes to the band saw, they also have a throat, but here, when you talk about the throat, it really only refers to the width of the material that can be cut. What is nice about a band saw is that the blade is actually open from the front to the rear, and the rear column does not obstruct long pieces of wood. Therefore, not only can a band saw be used for thicker and larger materials, but for making long and straight cuts. You can feed a long piece of wood or other material straight through and out the rear without anything blocking its way.

Check out some uses you can do with band saws:

Band saws can handle materials that are a good few inches thick, as whatever you can fit in there is determined by the wheel size. Thus, band saws are great for making long cuts, rip cuts, and working with larger and thicker pieces of material. Another thing which stands out about band saws is that they are quite versatile and have many different blades that can be used for them, ones for soft wood, hard wood, various metals, and more. Of course, a band saw is not going to do a great job with fine detail work.

When You Want to Use a Band Saw

Band saws are great to use if you have larger projects and pieces of material that need cutting. The size of the blade, and the way it is built, makes the band saw ideal for any piece of wood thicker than 2 inches, and the thickness of the material the band saw can cut is really only limited by the distance between the work table and the horizontal arm.

One of the biggest strengths of the band saw is making big, straight, long, and aggressive cuts. One reason for this is because the blade always moves in a downward motion, as opposed to the up and down motion of the scroll saw, thus eliminating up and down, and side to side movement.

Band saws are also ideal for doing outside cutting, and in fact, can only do outside cutting, but you can still make some pretty decent curves with them. If you have the right blade, a band saw can also cut through other materials, such as metal, which a scroll saw simply cannot do. Some projects that can be done with a band saw include making planter boxes, furniture, trim, shelves, and other larger things that do not require much intricate detail.

When You Don’t Want to Use a Band Saw

One thing that you do not want to use a band saw for is making inside cuts, because simply put, they just cannot do inside cuts. Moreover, if you don’t want to do a lot of sanding, a band saw is also not ideal, because the motion of the blades is very aggressive, and therefore leaves a lot of rough edges behind.

Band saws might just be too big and powerful to deal with really delicate pieces. For instance, if you have a piece of wood that is 1 inch thick, depending on the type of wood, it might actually rip that piece apart. When it comes down to it, band saws just are not made for small or thin materials, and they are not made for intricate or detail work.